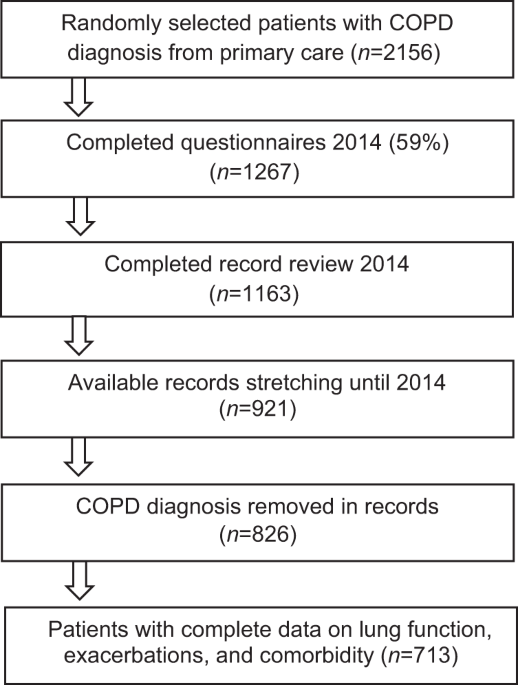 The first main finding of this study was that COPD patients with multimorbidity tend to see the general practitioner and COPD nurse more often for COPD check-ups than those without multimorbidity. Our results are not consistent along with de-prioritisation associated with COPD because of multimorbidity. However, we do not really know the amount of time devoted to COPD during the consultations or the quality of disease management. The second main finding was that having exacerbations was positively associated with getting routine COPD check-ups by the GP.

COPD patients with a higher number of comorbid diseases were more likely to have routine check-ups from the GP, or by both GP and COPD nurse, for monitoring of COPD. Patients with multimorbidity were more frequent care users, potentially resulting in surveillance bias such that there are a lot more opportunities to make other diagnoses, such as hypertension (although all patients along with COPD will have their blood pressure tested), which may be more likely recorded due to regular testing, thus inflating the total quantity of diagnoses. More visits to a GP because of multimorbidity increases the opportunity to discuss COPD and this could in part explain the higher magnitude association associated with multimorbidity with COPD being mentioned. This is mainly relevant with regard to GP visits and not COPD nurse visits, where we did not identify evidence of de-prioritisation.

As in previous studies, comorbidity was common in COPD patients 7 , 8 . Of the individual comorbid diseases, only hypertension was statistically significantly associated with receiving more frequent program check-ups regarding COPD. Hypertension is likely to be the most common comorbidity in COPD patients 1 , as here 57% associated with the patients had the particular diagnosis. Although hypertension is common in the general population, it appears in order to occur even more frequently within COPD patients 9 . Hypertonus is associated with the increased systemic inflammation in COPD 10 but has not really been found to increase mortality 11 or even risk of exacerbations seven . However , it is an important risk factor for other cardiovascular illnesses.

We discovered a positive, yet not statistically significant, association between depression and having routine check-ups. Some 21% of the particular patients in the study had a diagnosis of depression in their medical records sometime throughout the study period. COPD has been found to increase the risk of developing depression, plus comorbid depressive disorders has been related to an increased danger of exacerbations and mortality in COPD patients 12 . Many individuals have had persistent depressive symptoms intended for several years 13 .

COPD patients along with comorbid diabetes have been found to have an increased risk associated with severe exacerbations 14 . In our research, a positive association has been found between diabetes and having check-ups only by a GP or a COPD health professional, but a good inverse to get having check-ups by each. One possible explanation for this could become that sufferers with diabetes often have annual check-ups simply by a specialised diabetes doctor, which may lead to fewer check-ups by a COPD nurse. The logistic regression analysis indicated inconclusively that will patients with diabetes may have a somewhat reduced amount of check-ups by a GP, when not considered mutually exclusive, as in the multinomial models. It remains probable to speculate that the pattern of management is different pertaining to these individuals in the way that de-prioritises COPD over diabetes: a Danish primary care study, discovered that patients with coexisting COPD plus diabetes experienced annual control visits meant for their COPD less frequently than individuals with only COPD 15 .

At least one exacerbation during the previous 6 months, had been positively connected with having schedule check-ups of COPD with the GP or by both GP and COPD registered nurse. Having a history of exacerbations is recognised to be an important risk element for having additional exacerbations 16 , 17 and for deterioration of the disease 1 . Several comorbid conditions are also connected with an increased risk associated with exacerbations, like heart illness 3 and asthma 18 . The particular focus of long-term COPD management will be recommended to become on symptom relief plus preventing future exacerbations one . The results of the study suggest that primary healthcare is usually giving more attention to COPD management if patients have had a lot more frequent exacerbations, which complies with this recommendation.

More than half from the sufferers in the research did not have any regimen check-ups simply by the GP during the particular previous 2 years. One-third did not have check-ups by a GP or health care worker. Some of these patients might have got COPD check-ups in secondary care, but as this would only add to the variety of consultations it would provide no extra evidence of COPD de-prioritisation within primary treatment. Patients without check-ups in primary care had less comorbidity, much less frequent exacerbations, and less severe air-flow limitation. This could end up being seen as an example associated with giving treatment according to need in a primary healthcare setting struggling to keep up with the rising demands of an aging population. Within healthier individuals with less severe COPD condition outcomes, COPD received much less attention. The future consequences of this omission associated with routine check-ups for less severe COPD requires further research.

In a 2016 qualitative study in Sweden, GPs had been interviewed about their views on the particular management of COPD within multimorbid patients 5 . They stated that will COPD was less likely in order to be discussed during check-ups if the patient acquired few symptoms of COPD, whereas a history of recurrent respiratory infections or obvious airway signs and symptoms would most likely lead to a discussion regarding COPD. This particular is consistent with our finding that patients along with exacerbations were more probably to possess routine check-ups by the particular GP than those without having exacerbations. Nevertheless , in contrast with this qualitative study, all of us could not really confirm any de-prioritisation associated with COPD because of multimorbidity in our study populace.

As we all identified routine check-ups by the DOCTOR through a text reference to COPD symptoms or even management within the medical records, we failed to have any information about how time has been divided among COPD and the patient’s other chronic diseases. Hence, we can not assess the prioritisation of COPD relative in order to other persistent diseases. We defined de-prioritisation as not having at least one COPD-related check-up by the GP during a 2-year period, as this is recommended simply by national guidelines. However, getting one check-up does not really indicate intensive management of COPD. Neither were we able to separate previously planned visits from those when patients sought care for another reason and also discussed COPD at this particular time.

Having check-ups with a COPD nurse was not statistically significantly associated with comorbidity, exacerbations, or lung function, but there were statistically significant differences between the county councils that were included in the particular study. This particular may end up being due to variations in local procedures, plus patients attending the nurse-led COPD clinic specifically because of a COPD diagnosis, in comparison having a check-up by GP that could involve managing several conditions throughout a single consultation.

The shortage associated with permanently employed GPs and its consequences is an often-discussed question in main health care in Sweden. In this research, we could not really find consistent associations in between staffing problems and how COPD was managed at the PHCCs. Nor could we find any kind of association with whether they were private or operated by the county council. In larger centres, there was a greater likelihood designed for patients receiving check-ups by both DOCTOR and nurse. Presence of asthma/COPD clinics, which most centres had, significantly increased the chances of having check-ups by a COPD health professional.

Adherence to guidelines is still often used to measure the particular quality associated with care 19 . In multimorbid patients a holistic approach is preferable, and clinical judgement becomes more essential in GPs’ work whenever the patient’s individual needs are not well-served simply by single-disease recommendations 20 . During some consultation services, one condition might receive less attention than an additional, based upon the patient’s current needs and preferences plus the doctor’s and patient’s prioritisation of them. The NICE guidelines just for multimorbidity aim to improve quality of life by shared decision-making two . Hence, program check-ups of multimorbid COPD patients do not necessarily include reviewing all conditions every time.

A strength of this study had been the sample size associated with over 700 patients using a doctor’s diagnosis of COPD, randomly selected through 76 major health treatment centres providing real-world data from medical practice along with good external validity.

The particular use of both medical records and self-completion questionnaires was a strength, allowing for information about the particular patient’s own experience associated with symptoms in order to be combined with information from records. Data on exacerbations came through self-completion questionnaires and was dependent on patients’ recollection, plus therefore a time period of the previous six months was chosen.

Some 59% completed the particular questionnaire. The non-respondents had been slightly younger and more often women. Thus, the study participants tended to be older, and thus more likely to have a comorbidity, which may have got affected the results.

Among the 76 PHCCs, 71 (93%) completed the particular questionnaire about organisational characteristics, somewhat reducing the number of sufferers included in this evaluation.

Another limitation was the limited quantity of comorbid diseases contained in the analyses, but they were chosen on a theoretical basis and should illustrate the particular association. Given the direction of organization with priority, we usually do not think that adding more diseases would reverse this. The previous study found that will increasing the number associated with conditions considered, increased the particular prevalence of multimorbidity 21 .

The comorbid conditions were noted as present or even not in the record review, during or before the studied time period. We have not really considered their own severity or even duration. This is of potential concern, especially for depression as it is not necessarily a long-term diagnosis even though COPD patients frequently have persistent symptoms of depression 13 .

An alternative interpretation associated with the findings of more frequently mentioned COPD during services among all those with multimorbidity is that there is de-prioritisation of COPD treatment—or some other influences—such that worse disease characteristics result in more frequent mentions of COPD. To address this concern, we adjusted for each lung function and COPD exacerbations. This made little difference to the results, yet as the particular measurement associated with exacerbations has been not a particularly fine grain (at minimum once during the previous 6 months), there is a possibility of residual confounding.

A limitation towards the validity of our data may have been the occasions when COPD had been assessed but the assessment was not described within the healthcare records, and therefore not detected in the particular review. Also, we do not know how much time was spent on COPD during the check-up, in case the patients themselves brought up COPD, or what the particular consultation resulted in.

COPD patients in primary care more frequently had schedule check-ups when they acquired greater illness severity, multimorbidity, or regular exacerbations, suggesting that individuals in need of interest received it. However , all of us do not know the extent or even quality associated with the consultation time dedicated to COPD, justifying further research into the particular quality of COPD administration in individuals with comorbid diseases.